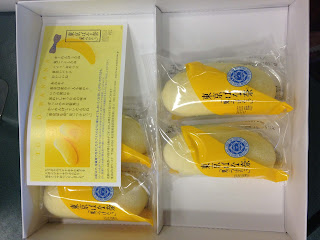 My friend and author Sydney Salter recently returned from a trip to Japan, and she brought me a Japanese treat to try – a banana-filled pastry (think Twinkie shaped like a small banana, made with rice flour and real banana filling). Produced by a company called Tokyo Banana, the pastry was incredibly light and tasty.

One of the most intriguing aspects of this small delicacy was its packaging. Each pastry was wrapped individually, with lots of Japanese labeling all over it – presumably ingredients, a telephone number, a bullet list of who-knows-what information. The only English on the entire package is a small logo that says “From Tokyo to All Over the Country Since 1991” and some extremely fine print on the front that says:

“People gather to TOKYO from here and there with memories of their home. And then, TOKYO gets everyone’s home town.” 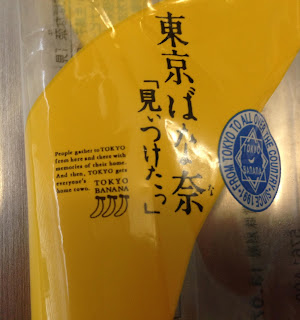 So that’s the only English on the whole package. Not something that might say – I’m just brainstorming here – “Banana-filled cake” or even “Cake being of like to a banana” (assuming it was translated by Google Translate). No, not that. Instead, it’s apparently a lot more important to warn you that TOKYO is going to steal your home town. Or something. I’m still not quite sure what it means. But it sounds vaguely sinister, doesn’t it? Not really the sort of slogan that’s going to make a lot of English-speaking tourists plunk down a fistful of yen when they’re hankerin’ for a snack. 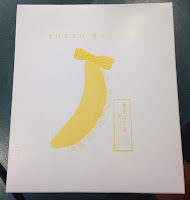 Or maybe it is. Maybe the Tokyo Banana company has hit on a marketing goldmine. Perhaps what our own country needs is a lot more food that ignores the fact that it’s food, and focuses instead on deep meaningful concepts like memories and territorial disputes.

After all, Sydney bought the banana-cake, and I happily ate it. And, heaven help me, I’d eat another one if I stumbled across it somewhere. Even if it’s in my home town. Call me a traitor.

Just imagine if all our marketing messages were metaphysical in nature. Instead of wasting time printing “breaded chicken tenders” on a package that obviously contains breaded chicken tenders, perhaps the manufacturer should say “Stars flash and sparkle, and then die in a magnetic rainbow of pulsing energy, creating new memories.” Or how about “Everyone sings happy songs to shame small birds to greater glory.” No wait, I’ve got it: “Limitations drift away like dandelion seeds meant for the neighbor’s pristine yard. Deal with it.”

Metaphysical marketing slogans – a whole new career field for writers. And remember, “dreams, like skateboards, can injure you with fun.”